Click here to find the ONE solution to solve all of your problems forever. Download the e-book now before it’s too late. Learn more about how you can be making the most money of your life starting tomorrow.

We’ve all seen them. And sometimes we’ve written them ourselves. While the above may highlight some extreme, unrealistic examples, the call-to-action (CTA) is an essential component of writing copy for digital advertising. There’s no point in having the best product or service if there is no clear path for people to discover and buy it.

Without a CTA, your content is the equivalent of someone in a bright red shirt who walks by you on the sidewalk. A stock image showing a happy couple or a pretty presentation of your product only catches a few seconds of a user’s scroll. Even if your image or video was enough to catch someone’s attention, without a strong incentive they won’t go anywhere except onto the next post. On the other hand, going too far might also make you out to be like a salesperson at a car dealership. You’re suddenly the person with “Always Be Closing”  set as their desktop wallpaper.

For many companies, this is a very serious Goldilocks problem. If you fail to give viewers a direction or incentive, they go cold and move on. Throw in too many sales pitches, it’s too hot and you might even get an unfollow. Finding a balance is essential.

Below we dissect some cases of CTA overload and absence. They aren’t necessarily bad or unsuccessful, but definitely opportunities for learning.

Amazon is an e-commerce titan. They span several unexpected industries including search, web hosting and shipping logistics. But for most people, they’re just a marketplace. From that point of view, it should be no surprise that Amazon always has some form of a CTA, even if it’s not a “Buy Now” button.

Let’s look at the below post from January 2019. Not counting the numerous minor hyperlinks and interface buttons, there are four direct CTAs here. Two of them point to the same link for applying to the scholarship.  One of them is from Facebook suggesting you like The View’s page. The last one is an invitation to watch the promotional video as a watch party – an optional interface. 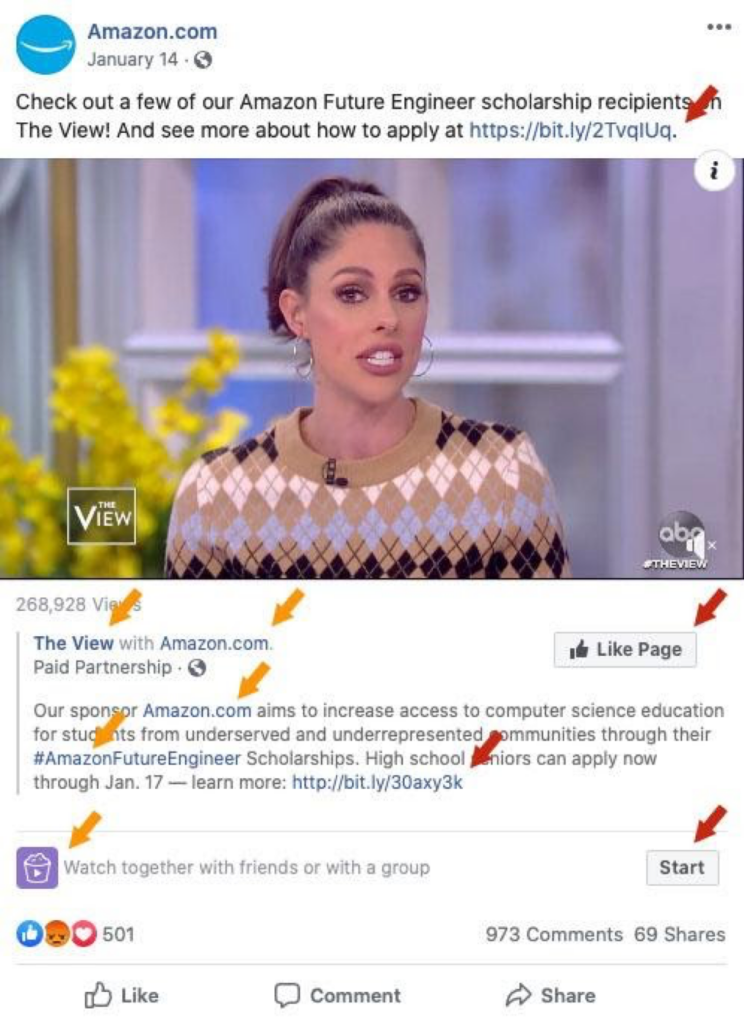 There are of course – the other hyperlink options such as #AmazonFutureEngineer. Though likely negligible, people may click on this and deviate from the content, never returning to click the CTA links. Hashtags can be a great tool or even essential to your campaign. But when a post already has so many complications, it might be wise to use it only on Twitter or Instagram. Since hashtags are native to those platforms, they actually can enrich the original piece of content. Clicking through in this instance only led to lesser-quality promotional posts. In this case, since it was the partner’s caption that included the hashtag, the original post text could have been set to be hidden, keeping only the simpler Amazon copy.

It might be easy to say, what’s wrong with this? A click is a click! That’s true but unless all of your links point to the same thing, or at least eventually do, the CTA has failed. Humans have a shorter attention span than goldfish. If you sent people the wrong way, it’s unlikely they’ll come back and look for you.

This campaign was likely very successful by virtue of the partnership and on-air nature. It’s also worth noting that this post, along with every other on Amazon’s page, is riddled with almost entirely negative customer service complaint comments.

Here’s an email header from retail giant Macy’s highlighted by Econsultancy showing what looks like CTA keywords hell. Big bold letters, strong colors, a button, a speech bubble for some reason and a background that is more text! 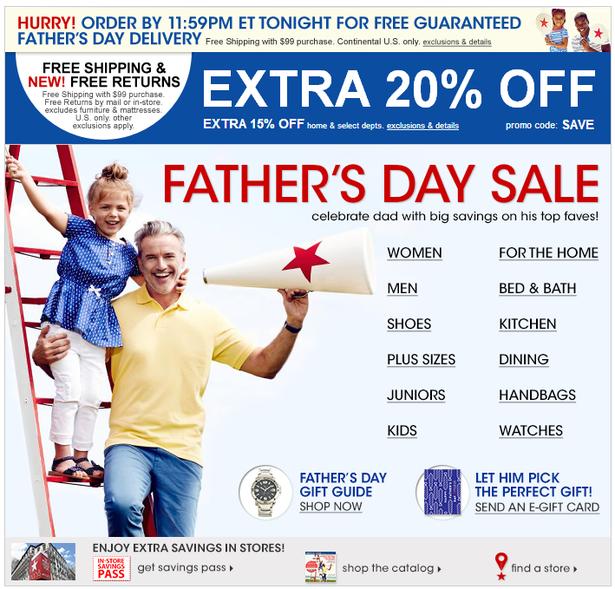 There’s so much extra going on here. In fact, the word extra is used THREE times… The offer is limited in its exclusions, but make sure to find the link in tiny print to see all of the exclusions. There’s a small promo code you might miss among all the other bombastic fonts. Also finally, it’s a friends and family sale but you’re neither of those so clearly this offer isn’t for everyone.

Without insider knowledge of Macy’s likely complicated and carefully balanced system of promotions and foot traffic, this smells greatly of “this just works for us.” In-house designers and copywriters have likely reached this Frankenstein of an email header after years of tweaking based on an endless feedback loop of click data. They might even hate it internally, but it gets them the numbers they need. The best thing we can learn from this is to avoid it. If you’re a growing company, don’t let yourself get here.

American Express is a company with a huge digital presence and a strong, healthy reputation. As a big financial services company that facilitates payments, they touch countless aspects of people’s lives. This often shows in their large marketing footprint with in-person events at restaurants and other pop-ups to show partnership with the businesses where customers are expected to make their purchases. 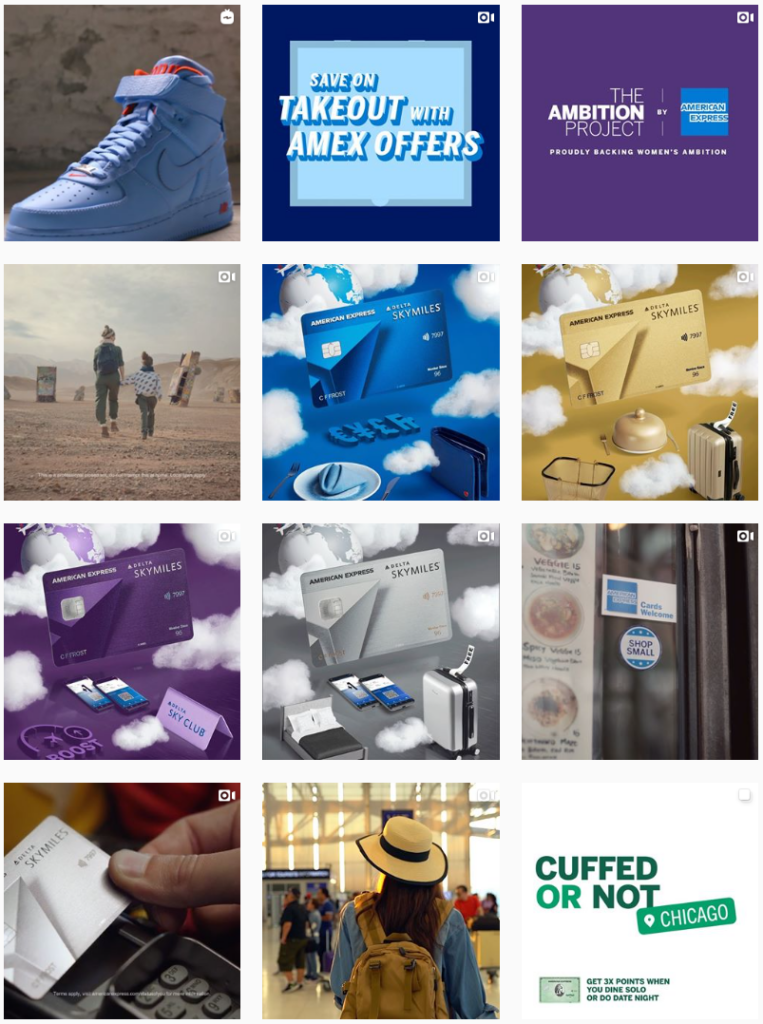 In this example of posts from February 2020, we see a different kind of Amex. Almost half of these posts have a card – the product – explicitly featured in the content. Only a third are lifestyle-focused with no direct product promotion. But even in those cases, the branding is heavy. There are at least two hashtags and you’re told to follow the link in the bio for more information. Of course, you are almost always reminded that terms apply to any and all offers or promotions.

Amex knows their audience best. They have the numbers and likely are following the numbers to meet their social performance benchmarks. But does every person who follows them on social media want this type of content? It’s likely the most points and card savvy people already know about all the new card products from their emails or blogs they follow. Instead of presenting them all immediately, Amex could have taken some time to use this Instagram post to highlight the differences in the new Delta cards with content showing how they could be best used.

Instagram at its heart is a storytelling platform. If you have a shopping good like a t-shirt, a CTA frenzy makes sense. If you are hoping to get leads for new credit accounts, someone scrolling on their commute or while on a bathroom break isn’t likely to bite. Instead, tell your story on the platform rather than trying to scurry them to your landing page. If you do a good job, they’ll save the link and come back to you.

THE PROMISED LAND WITHOUT A SALES PITCH

There are of course examples of companies that don’t have to use CTAs. These are going to be large, established companies who don’t need to show people how to buy their product or even do much convincing that they are the best on the market. These companies are looking to build their brand values and sentiment. They’re reinforcing the established opinions on their product and keeping top of mind for the next purchase. They are the Nikes, Coca-Colas, Apples and Visas of the world. As much as they look sexy and bold, the vast majority of companies could never take this approach. And without a direct tie back to sales or conversions, there’s little data here for them to benchmark success for campaigns.

Nike is one of the most recognized and respected brands in the world. Their products have an unquestioned presence on shelves and on feet. One of their latest products is so good, some are saying they may give an unfair advantage.

So you might be surprised to visit their Instagram page with more than 100 million followers and not see very many shoes. Instead you see faces. People, athletes, big and small, that Nike has sponsored around the globe. Nike has spent lots of money outfitting these champions and now uses their stories of success to certify the success of their product. 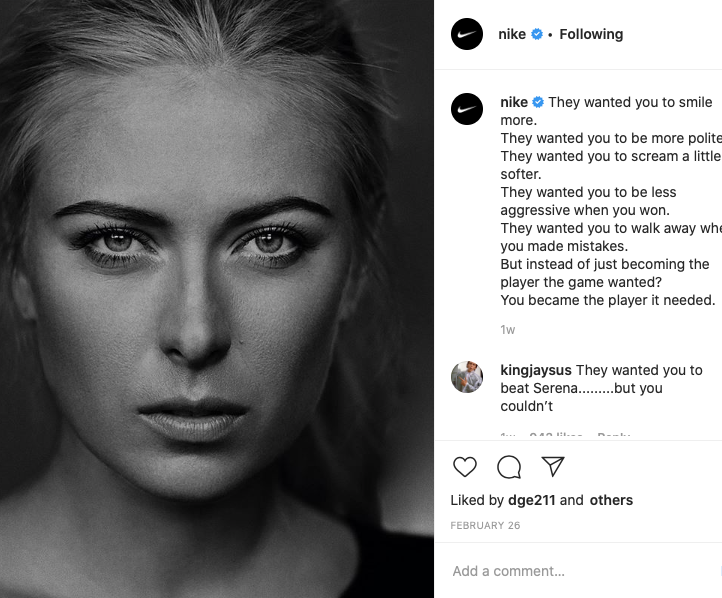 Could Nike slap up a post with a beautiful new shoe design, with a limited time offer for a discount, driving tens of thousands of sales instantly? Absolutely. But they’re not doing it, at least not right now.

OUR [SIMPLE] CALL TO ACTION…

Now, the irony is not lost on us here, but if you are interested in learning more about how you can blend both your performance and brand marketing efforts, take a look at Balancing Brand and Performance Marketing guide here.

B2B marketing 2022: A year of accountability, technology, and buyer engagement