Prior to the COVID-19 outbreak and social distancing, we had the pleasure of welcoming Rachna Choudhry, co-founder of the civic engagement platform POPVOX, to join us for a Lunch & Learn to talk about the intersection of technology and political advocacy. During our discussion, Rachna shared her top tips for getting your voice heard, which really resonated with us as a marketing agency.

We wanted to share these takeaways to help marketers understand how to use storytelling to get your point across, using political advocacy as an example.

At some point in time, we’ve all seen a petition letter reading “sign here to pledge your name for better technology in the public school system.” Have you ever wondered how effective those actually are? It definitely doesn’t hurt, but it turns out there is a better way to make your voice heard. Rather than just adding your name to a petition, it’s much more effective to find a way to make it personal. Sharing your own story rather than submitting a form letter makes all the difference to Congress and to lawmakers. If you have 15 minutes to meet with a lawmaker, or you take the time to write a letter or an email, sharing how a particular piece of legislation affects you will resonate with them. They’ll be able to make a connection with you as one of their constituents. Oftentimes, the person on the other end is someone from a different background than you, so finding common ground and making your personal plea engaging is crucial. 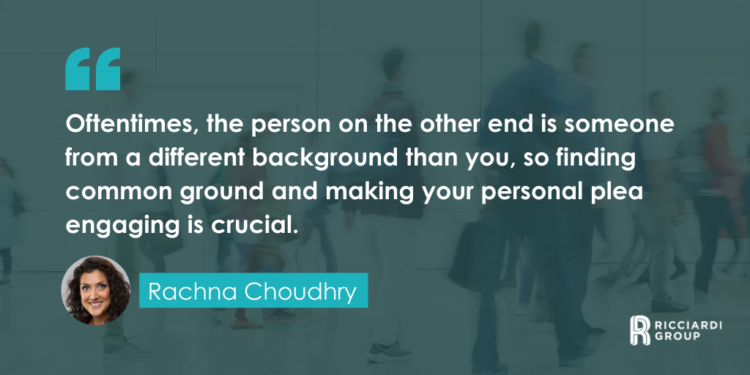 How you deliver your message matters.

Now, more and more, people use social media as their crutch. You’ll hear people say, “Oh, I tweeted at my lawmaker,” or “I retweeted some message.” The problem with that is lawmakers are supposed to listen to members of their specific constituency. On social media, it’s difficult to figure out whether someone is a legitimate constituent or a bot. Since there is no way for them to verify who you (or where you reside) on social media, these messages cannot be factored into their decision making.

So, what is the best way to deliver your message? The Congressional Management Foundation conducts a survey every year and here are the best ways to influence lawmakers, in order of effectiveness:

Stories are about 22x more memorable than a fact alone. This is something worth reminding people because many people launching campaigns assume that arming themselves with a ton of statistics about a particular issue will really move the needle. It doesn’t.

For example, a professor at Wharton did a study, where she gave participants some fake money to donate to a certain cause, and there were two different treatments for a particular campaign. One was a one-page fact sheet on poverty and starvation in Africa. The other one included a photo and story about a little girl who struggles to get food and water for her family, walking several miles every day for supplies.

The study found that more people were likely to donate their “fake money” to the story about the little girl, rather than a big one-pager on statistics. Now, this is not to say you shouldn’t have those statistics on-hand. You should have them, as back up, but focus on sharing the story because that’s what is truly effective.

Many thanks to Rachna for sharing her insights with us. We invite you to learn more about her amazing organization POPVOX and how they can help you connect with the lawmakers that work for you.

B2B marketing 2022: A year of accountability, technology, and buyer engagement